Stronger together
These few pages show briefly how to use PrintMaster® software and Atuta Fonts for typesetting in Assyrian. I have used "PrintMaster®" software because it is affordable, starting $10 (which includes in the package "Atuta 2008".) You can use PhotoShop, In-Design, Illustrator, CorelDraw, PageMaker and some other software that can flip the text block horizontally. These program are a little expensive which are used by professional graphic designers and desktop publishers (printers). The software "PrintMaster®" that I have used in my package is perfectly sufficient for everyone to typeset in Assyrian.

Acknowledgments
In order to produce these fonts, I have had plenty of help. I would like to take a moment and thank friends and family for their support in this venture.

Among the friends who were supportive is Mr. Sheba Mando who was the first client who accepted the font package, and let me use it in his print shop, “Alpha Graphic Printing Co.” in Chicago. Since the first day, he was anxious and eager to work with me and keep it up-to-date. I have made a lot of changes to Atuta’s fonts since I started it, and I needed an actual printing place to implement it and see how it worked, and if the readers liked it. Mr. Mando has not hesitated a second encouraging me and giving me input to modify and upgrade Atuta®.

Mr. Tony Khoshaba, Mr. Ramon Michael, and Dr. Esho Marcus, D.D.S. were the ones who lent me the software necessary to build the fonts. I deeply appreciate their help and support.

And of course, there is Mr. Issa Benyamin who has designed the most amazing fonts and given me the most valuable advises to create and develope the concept of “Atuta®”. Mr. Benyamin has a collection of hundreds of one-of-the-kind Assyrian calligraphy drawings and paintings shown in the museums around the world, and displayed in the living rooms and offices of distinguished people who admire his unique art. I have been very blessed to have known him in Tehran in 1975 and become familiar with the rules of the fonts and their shape. In 1994 When I started the project in Chicago, he was most cooperative when I told him about this project. I sincerely appreciate his help.

And last but not least, I thank my students who have shown interest and love for Atuta® and taken time to learn it and type in Assyrian.

Occasionally, friends ask me if I have struck it rich with the project. My answer is that I have already been paid, I just haven’t cashed my checks yet. To me there is no better joy than being able to express myself in my language, and it is just as much satisfying when I see my students are enjoing our language. 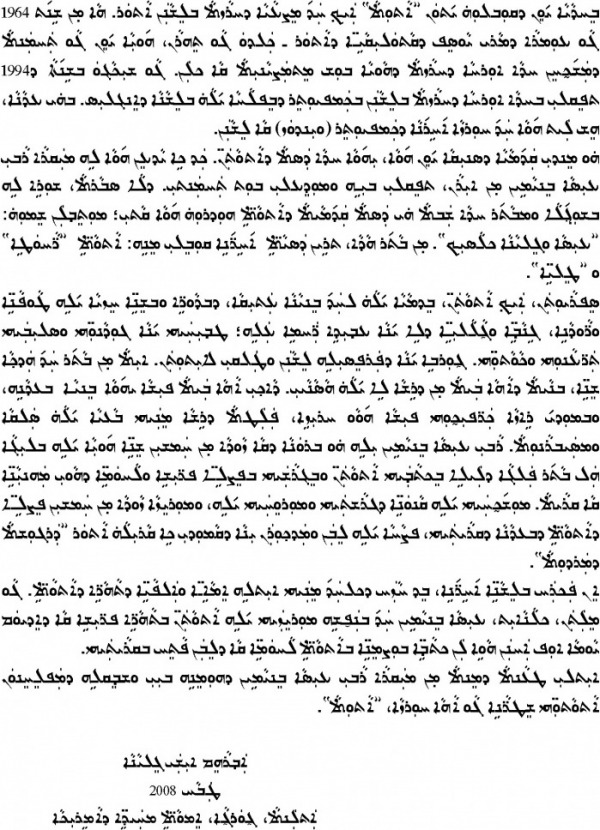 The pupose, advantages and disadvantages

In 1966, I was twelve when I started typesetting in Saint Joseph Catholic Church in Tehran, Iran. It was love at first sight! I already loved my language, and when I saw the type (Atwati) in Assyrian, I was fascinated the way it was set and printed. There was nothing I loved more; there still isn’t.

There was a long process from typesetting to printing and binding the book. The stage that was the most problematic was the lack of type. The type was made of alloy of lead and copper, and it was not easily accessible nor was it affordable. I always had the urge of creating a way so I wouldn’t have to deal with this problem.

To make the story short, in Chicago in 1994 I came up with the idea of using the English word processors (and software) to type in Assyrian. I met with the legendary Assyrian calligrapher, Mr. Issa Benyamin, and I used his drawings as model for my first font, and we called it “Issa & Giliana Classic”. After that, Mr. Benyamin let me use two more fonts called “Script” and “Sleepy”, which are mostly used for titles and topics.

The technique I have created is very simple: 1. Type in Assyrian using Atuta® font, 2. Flip it horizontally. The rest of this book explains how to do it.

Atuta® is merely a font. It is a collection of alphabetical, special characters, and numbers. When we press on the keyboard, we are making characters appear on the monitor. If the font we have used is English, like “Times New Roman”, the characters we see on the screen are going to read English. If the font we have used is Assyrian, in our case, Atuta®, the characters appear on the monitor are going to read Assyrian, it’s that simple. All we are dealing here with is the shape of the letters; the way they look on the monitor (or printer). Of course; there is still another issue: the direction of the cursor. This is where the software “PrintMaster®” or other programs are helpful.

The direction of the cursor in ordinary program is left to right, where in the Assyrian and other sematic languages, it is from right to left, and PrintMaster® has solved this problem. Using this program, click on the text block and click on the tool “mirror” in tool bar, and the text will read right to left!—unbelievably simple! We will show you how to do this in this manual.

1. Not all programs are capable of flipping the text block horizontally. That makes it difficult to use this technique on the internet or doing e-mails.

2. Converting the page that contains modified (horizontally flipped) text blocks to PDF files, sometimes gives undesirable results. In general, whenever something is modified, might appear awkward in PDF file.

1. It is transliterated. Most of the characters sound identical to their English sound-alikes. Press “a” for “allap”, “j” for “jammal”, and “t” for “taow”. The need to learn a new keyboard is minimal. If you can type in English, you already know how to do it in Assyrian.

2. “PrintMaster®” is one of the programs that works seamlessly with Atuta® and it is very affordable.

3. Suppose you are working with a graphic software and want to type a few lines of Assyrian text in your design, or you are happy with In-Design® or PageMaker® and want to typeset a 600 page Assyrian book; you won’t have to switch to the other (Assyrian or Syriac) software to do your text. Just select the Atuta® fonts and type! The software will recognize your text as English (remember, the computer doesn’t speak English or Assyrian, it only represents characters.).

4. Even though it is not very desirable, it can be used on all other programs that won’t flip the text, including the internet e-mails. Only the text will look backwards.

My goal of creating “Atuta®” has been to create a tool to type in Assyrian. To me, this has been a dream come true—to see articles in my language being read on the screen and being printed on paper with different colors and styles. I hope the reader will enjoy Atuta® as much as I have.